A Changed Company? - Thoughts on Microsoft

By Thomas Milde - April 17, 2019
Microsoft – Now there’s a name that’ll get the blood of any IT interested person boiling! The guys from Redmond have had to fight an uphill battle in public perception for some time, and to be fair, a significant part of the bad PR they’ve been getting is their own making, a combination of poor product design and spectacularly bad market assessment and communication. Windows 8 was “special”, as in “Oh, he likes to cut the heads of dolls” special, Windows Phone was, unfortunately, an unmitigated disaster, while the company’s attitude towards open-source has traditionally been hostile, to put it diplomatically. Add to this the fact that the company has a de-facto stranglehold on the desktop OS market, on workplace productivity applications (hell, we even used Microsoft Office at Apple!), and a dominating position in the server market, and you get a company that is not particularly popular. At the same time, you would think that a company has such a stranglehold on all major fields of the IT industry would be wary of change, and you wouldn’t necessarily be wrong.
However, over the last few years, things have started to change at Microsoft. It’s hard to pin down exactly when that change happened, but from the way it looks to me, it must have been shortly after Steve Ballmer’s departure from Microsoft. Ballmer had been a controversial CEO to put it mildly, claiming Open Source software was a “cancer”, that the iPhone would not be a success, and throwing violent tantrums at Microsoft HQ. He was the driving force between Windows Phone, Windows 8, the ill-fated Zune media player, as well as the company’s first generation of Surface tablets.

Following his departure, Satya Nadella took the reins of the company. It is under his leadership that Microsoft has made a few remarkable about-turns. The biggest one would definitely be the approach towards the Open Source Community. Far from considering it a cancer like his chair-throwing predecessor, Microsoft actually joined the Linux foundation in 2016, and backed up its commitment in 2018 by joining the Open Innovation Network and contributing two thirds of it’s 90,000 patents to this.
Then, there’s mobile. Granted, Windows Phone may have gotten the axe, but in a way that actually strengthened Microsoft’s position in the market. In recent months and years, the company has intensified their push towards cross-platform availability of their flagship Office line, making it easily available on iOS, Android, and OS X in addition to just Windows. In fact, I’d say that large parts of Office, particularly of Office 365, are now so readily available and interoperable that you could call them platform-agnostic, without any major loss of functionality. In fact, I’m writing this article on Word for OS X. This capability puts Microsoft into a unique position in the market as the only professional office suite that is not tied to a mobile OS provider. Other products, such as OneDrive have equally impressive capabilities and an aggressive price point, as I pointed out in my last article.

Then there’s the hardware side, probably Steve Ballmer’s most enduring legacy at Microsoft. He was the driving force behind the Xbox, now a firm competitor in the games console market. Hell, even I as a former representative of the PC master race now have an Xbox One S in my own living room, which speaks volumes about just how attractive of a platform it is. Then there’s Microsoft’s Surface devices. Another brain child of the Ballmer era, Microsoft’s tablet had a rocky start, but has evolved into a rather impressive device over recent years. The regular Surface has since been joined by laptops, desktops, and even a budget version positioned to compete with the iPad. Personally speaking, if Microsoft had launched the Surface Go a few months earlier, I’d have gone for that rather than the 2018 6th Generation iPad. As for accessories & peripherals, let’s just say that my go-to Bluetooth keyboard for over three years has been a Microsoft product, and with good reason.

In addition to all those changes, Microsoft has actually managed to turn its brand identity around in a rather respectable way. I remember the days when setting up & registering a Microsoft product was akin to doing your income tax declaration, with all the aesthetic quality and warmth of a German tax collector. And by the way, we’re talking about games here, not even about productivity software. However, when I set up Office 365, the entire process was as quick and easy as you’d expect to see from the likes of Google or Apple, while patch notes, etc. have taken on a bit of a cheeky tone you’d be more likely to see from the likes of Slack or Todoist.
With all that being said, Microsoft is still a toxic brand for many people, and I can understand if someone doesn’t want to use their products. Hell, I STILL haven’t forgiven them for killing of the Microsoft Flight Simulator franchise, and I doubt I ever will! Seriously, I’m absolutely LIVID about that! Anyway, getting back on track, there’s numerous alternatives for almost every Microsoft product, both commercial and open source. As someone who used Linux for a couple of years, I’m speaking from experience here, and Ubuntu especially is a VERY good option for anyone wanting to tip their toes into the open source world.
That being said, Open Source has its limits, and I will touch on those in a future article. For now, anyone who needs seamless cross-device and cross-platform functionality out of the box will have serious issues setting that up with an open source alternative, particularly if they’re only regular users. This is where Microsoft currently towers head & shoulders above the competition, and has a unique position, and the primary reason why I went back to them. I personally work with several Apple devices when it comes to running my blog and my YouTube channel, and this cross-platform capability is a lifesaver when it comes to preparing scripts, article drafts, or organising preproduction work for the next video. At the same time, I’m not tied to one particular operating system anymore, actually increasing my flexibility when it comes to device purchases. I certainly haven’t regretted moving back to them at all.

For a long time, companies like google or Apple have been seen as the upstarts, the drivers of change, the predators in the market, while Microsoft has often seemed like a lumbering battleship, a relic of a long-gone era. However, things have quite obviously changed in recent years, eliminated toxic individuals from its management team, and thoroughly rethought its product line. As a result, the guys from Redmond are now in a unique market position, and in some ways actually more ambitious & agile than at least Apple. There’s still a lot of ballast from the bad old days that needs to be shed, and a lot of work to be done to really mend fences with the open source community, but for now, I’d say it’s only fair to give Microsoft another chance.

Popular posts from this blog 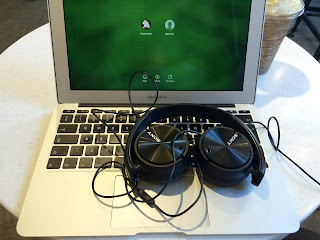 If you’re anything like me, then I’m sure you’ve had moments where you just wanted the whole world to shut the f**k up! Be it because you’re dealing with a complicated issue, because once again you’re the only one in the entire office that appears to be doing ANY work, or simply because you’re having a bad hair day. The reasons are plenty, and usually valid. The big question is what to do about it, after all shooting your co-workers is usually out of the question. Unless you have a good lawyer who can turn anything into a self-defence situation, but that is another story entirely, one that is currently showing on Netflix. ;)  Since the use of firearms in this situation is a non-starter, the tool of choice for most people will be headphones. The choice available is staggering — Earbuds, Over-Ear headphones, On-Ear headphones, wired or wireless, regular or noise cancelling, it’s all a question of personal preference… or budget. For most of the last year, I’ve been using a pair of Beat
Read more 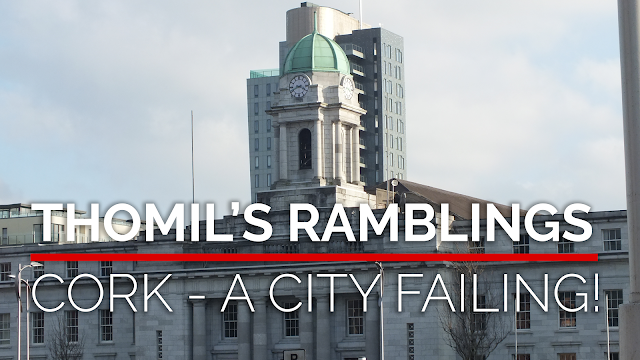 There’s something rotten in the state of Cork! For years, the supposed “City Rising” has been trapped in a downward spiral. Yes, new and impressive buildings have sprung up along Albert Quay and around Kent Station, I work in one of them, however behind that glossy veneer, the city has been slowly falling apart. The streets are pockmarked with potholes that more often than not border on craters, pavement stones are loose and waiting to trip up unsuspecting pedestrians. What should be sweeping urban plazas are desolate wastes, dotted with black asphalt scars where trees used to be. Entire streets have been reduced to looking like a war zone, with crumbling shells of buildings held up by rusting steel beams, ready to crush passers-by. That’s if you can walk down those streets in the first placed without being run over by cars, lorries and delivery vans criss-crossing every which way, ignoring red lights and using narrow laneways as rat runs. Even they can count themselves lucky if they’r
Read more

Third Level Insanity? Why the university craze may be a mistake 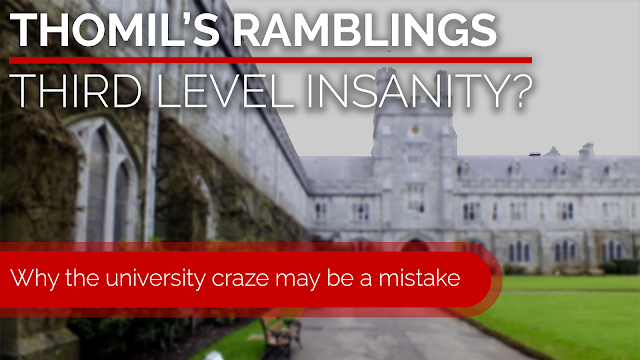 Cork is a university city, whether you like it or not. Whether it is University College Cork, or its slightly less glamorous cousin, the Cork Institute of Technology, both have left an indelible mark on the city. The UCC quadrangle is one of the must-see sights in Cork, while the Lewis Glucksman Gallery is one of the premiere venues for contemporary art in a country that often seems bereft of art in general, but that is a topic for another day. Students are seemingly everywhere, my bus to work in the morning seems to be full of them, and student apartment complexes dot the cityscape. With a student count in the five-digit range for both colleges, the economic impact on the city cannot be denied. And that footprint is likely to increase as more and more people opt to go for a college degree. UCC has become an integral part of the city. From its historic Quadrangle...  to the brutalist elegance of the Boole Library, the city just wouldn't be the same without it. But
Read more