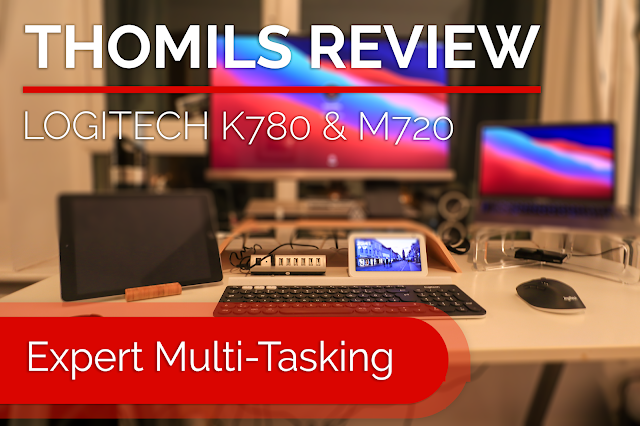 So, working from home is here to stay, certainly for the rest of this year, and possibly well into spring 2021. This means that my office will have to pull double duty for my day job and my blogging and gaming exploits for at least that time. So far, I’d been making do with a dedicated keyboard and mouse each for my private MacBook and for the work laptop, a Lenovo Thinkpad. However, this caused quite a bit of hassle when putting the company machine away at the end of the day, with cables and kit everywhere. With the current situation bound to last for quite some time, something more convenient had to be brought in. As it turned out, the solution basically meant going back to my hardware roots. Way back in the day, I used to be a huge fan of Logitech keyboards and mice. They were a staple for my computers before my Apple days, before I started my blogs, hell, even before I had my own place, back when I was still living with my parents. I generally liked their products but lost track of
Post a comment
Read more

Project Moca - A Solution without a Problem?

I’ve been rather complimentary about Microsoft in the past on this blog, and with good reason. The company is a lot more adventurous ever since Satya Nadella took over from the walking train wreck Steve Ballmer in 2014. The Surface Line appears to be going from strength to strength, Xbox has, against all odds, managed to establish a firm place in the games console market, and their business offerings are rock solid. Hell, even the quasi-legendary Microsoft Flight Simulator recently made a comeback. Additionally, Microsoft has also been a lot more experimental recently, as they’ve shown with their new Fluid Framework, which was announced back in 2019. This is the background against which their latest experiment needs to be placed. Project Moca What exactly is Project Moca? A Project Management Tool? A Productivity Suite? A tech demo for the Fluid Framework? Some engineer’s quarter-end EVP (Emergency Visibility Project) that somehow got green-lit and released to the public? Honestly, I
Post a comment
Reactions:
Read more 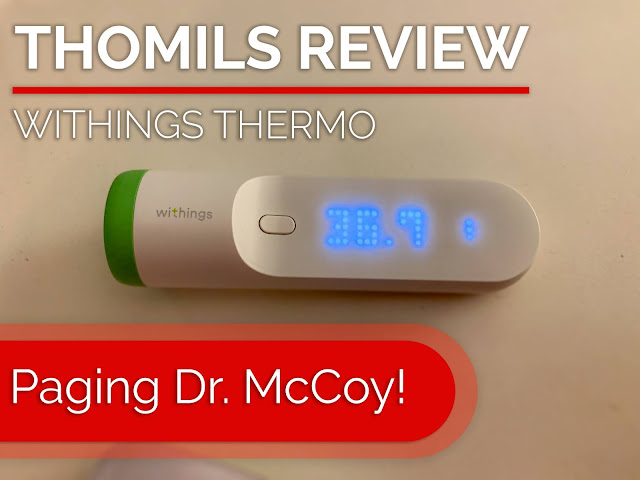 Well, as a consequence of that little COVID scare earlier this month, I decided to finally get a dependable thermometer, particularly since flu season is starting and I want to be able to catch any flu sneaking up on me early enough to head off the worst of it. Of course, with me being the unashamed gadget hound that I am, your run-of-the-mill 5€ thermometer from the chemists or drug store simply wouldn’t do it for me. Hey, I have a reputation to protect! As a result, I decided to go for something that I’d first noticed in my time at Apple. Withings Thermo The box is rather minimalist, keeping you guessing as to what's really inside. Okay, I admit it. The idea behind Withings Thermo may at first sound like peak gadgetry. However, in a time where almost everyone I come across in the street is either sporting a FitBit or an Apple Watch and as a consequence has an app tracking their activity and vital signs, adding body temperature readings to this data set is only logical. And that’
Post a comment
Reactions:
Read more

COVID-19 and Lockdown - This time it's personal! 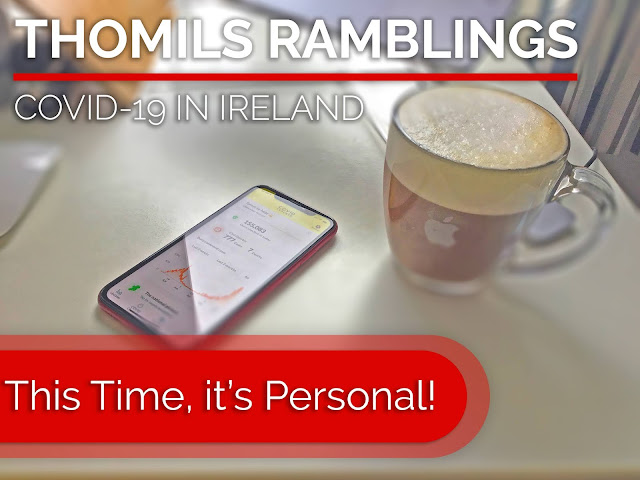 So, Ireland has been on the highest lockdown level again since midnight on October 21st. To be fair, this was kind of inevitable, given the massive explosion in COVID cases in recent weeks, something that was accompanied by an equally worrying increase in the percentage of COVID-19 tests coming back positive. However, unlike the complete lockdown back in spring, this lockdown is not quite as severe, as cafés and restaurants can still sell take-aways, while the definition of “essential” retail stores was expanded somewhat. Still, the effect has been immediate and somewhat severe, something not helped by the usual shower of anti-mask cranks, racists, neofascists, religious nuts and other malcontents raising a huge stink. This time, the impact has been a bit more personal though. I’m currently half-way through a two-week time off period that was more than overdue! A few days before this time off was supposed to start, I started feeling a bit sick. A persistent cough, a tingling soreness a
Post a comment
Reactions:
Read more 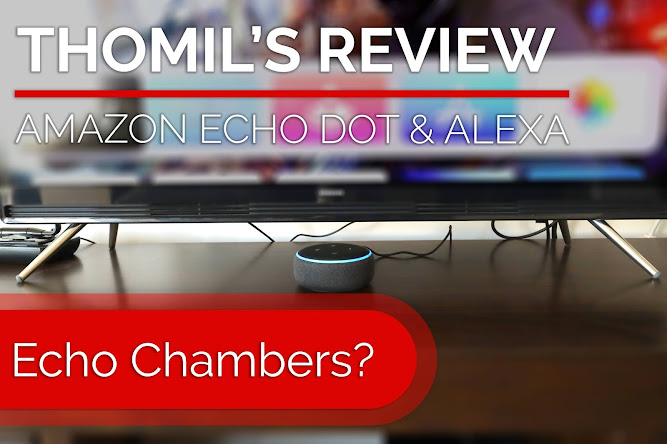 So, over the last couple of months, my blog has seen quite a few posts about Amazon products... if you ignore that embarrassing break over the summer months that is. That’s simply because bit by bit, I’ve found their products to actually be quite useful in my everyday life. Granted, not all of them are equally useful all the time, but all in all, they’ve really been useful in completing my smart home setup here at home. Anyway, for this article, I’m going quite a ways back, all the way back to January 1st of this year, to be precise. On that day, I published a long-planned article about my experience in setting up a smart home in my apartment here in Cork. At the time, I already had a pretty extensive setup, and on the whole, not that much has changed since then. I’ve added another speaker, while still waiting for a decent offer for a robot vacuum to roll around. There has been one major change however, and that is the arrival and integration of two more Amazon Echo speakers. The speak
Post a comment
Reactions:
Read more

The Death of the Netbook 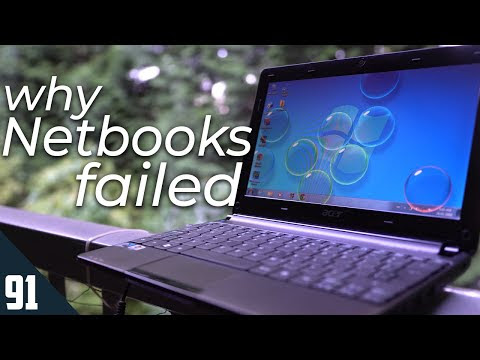 So, while aimlessly surfing around yesterday, I stumbled across a rather interesting video over on YouTube, one that dealt with the apparent death of the netbook, a category of computer that I have had quite a bit of experience with. Seeing an Acer Aspire One on the screen, even if it was a later model, was certainly a blast from the past for me. The video itself had a bit of a negative and dismissive slant towards the idea of the netbook as such, though I’m certainly not the most objective person to judge this, given the fact that the very first computer I bought with my own money was a netbook, namely my trusty Acer Aspire One 110L. In fact, it was this device that set me on my journey as a blogger. Granted, the Linux distribution that came with the device, Linpus Lite, wasn’t anything to write home about, but it was a nice little device, good enough to stay in use from January 2nd, 2009 until April 2012, just a few months before I made my big move to Ireland. This blue wonder, my Ac
Post a comment
Reactions:
Read more 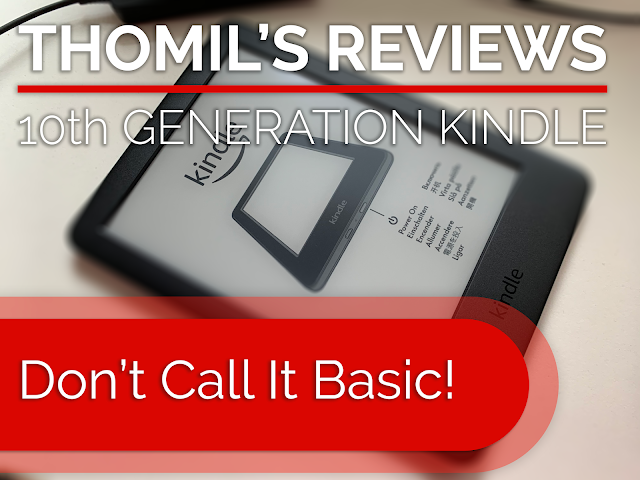 I’ve been fascinated by eBooks for quite some time. I’ve dabbled with the Kindle app both on my old Eee Pad Slider and on my various iPads, with the latter also seeing me try out Apple’s Books, but this never really caught on. The Eee Pad in particular was far too heavy, but even the iPads were not exactly lightweights for extended reading. The solution would of course have been to go for a dedicated e-Reader, but I never really got around to it. Plus, the original editions of Amazon’s Kindle were pretty pricey, and I didn’t see any reason for spending that money on a device that was only suitable for a single task. Fast forward to 2020 and the old rules don’t really apply anymore. In addition, Amazon recently released a new entry-level Kindle at a pretty competitive price point and so I decided to simply go for it. It took a week to get the device, thanks to Amazon’s increasingly “creative” logistics processes, but it eventually got here. Tech Specs The 2019 10th Generation Amazon Kin
Post a comment
Reactions:
Read more 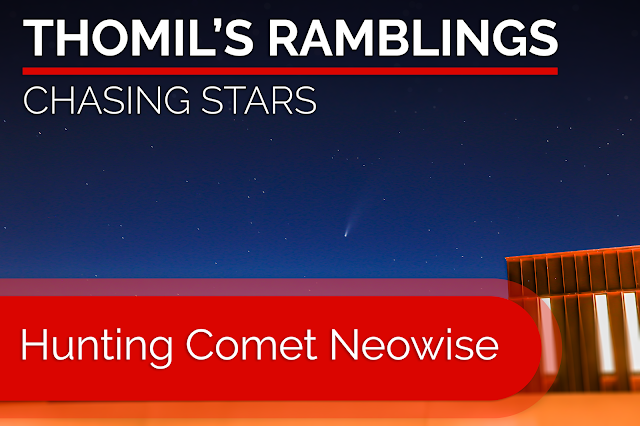 Sometimes, the best things in life really do happen by chance! While I certainly wouldn’t consider the ongoing pandemic situation to be a good thing, it has forced me to work a lot more with what I have in my own personal surroundings. The absence of any major commutes has also meant that I can spend a whole lot more time in the evenings on things that I really care about. And wouldn’t you know it, it’s just at this moment that a most unusual visitor decided to come calling. Now to be fair, C/2020 F3 (NEOWISE), as this visitor is officially known, isn’t exactly new. It had first been discovered on March 3 rd , 2020 by the Neowise program, a team that uses NASAs Wide-field Infrared Survey Explorer satellite to look for NEOs, or Near-Earth Objects. Normally, WISE is used to hunt for exoplanets, but it is regularly used to hunt for comets, asteroids and other such stuff that could come close to Earth. However, it’s only since it passed its perihelion back on July 3 rd  that comet c/2020 F
Post a comment
Reactions:
Read more
More posts